Over a million people have been displaced by violence.

Almost half of them are children. You can help us meet those in hiding or still on the run with food, shelter, medicine and other critical supplies. Supply a family with a month's worth of rice for just $35.

"Because the army came and attacked us, we cannot live in our village anymore."

Since the Myanmar military seized control in February 2021, nearly 700,000 people have been forced from their homes by the resulting violence.

That brings the total number of people displaced right now to a record 1 million people.

It’s the largest displacement of people in Myanmar since the offensives against the Rohingya in 2017. We were there then. And we’re there now.

Ready to make an impact?

Here’s what your donation can do.

$6 provides a blanket to help protect a family forced to sleep outside.

$35 delivers a month’s supply of rice to a family who escaped with no food.

$32 provides a tarpaulin for shelter to protect a family from the elements.

$50 supplies clinics and trained health workers with medicine for 10 people.

*These are representative of the type of relief items we deliver, which may vary due to the specific needs of a particular displaced community.

Or start your own fundraising campaign.

Your campaign can bring others together to provide even more displaced families with the food, medicine and shelter they need to survive. 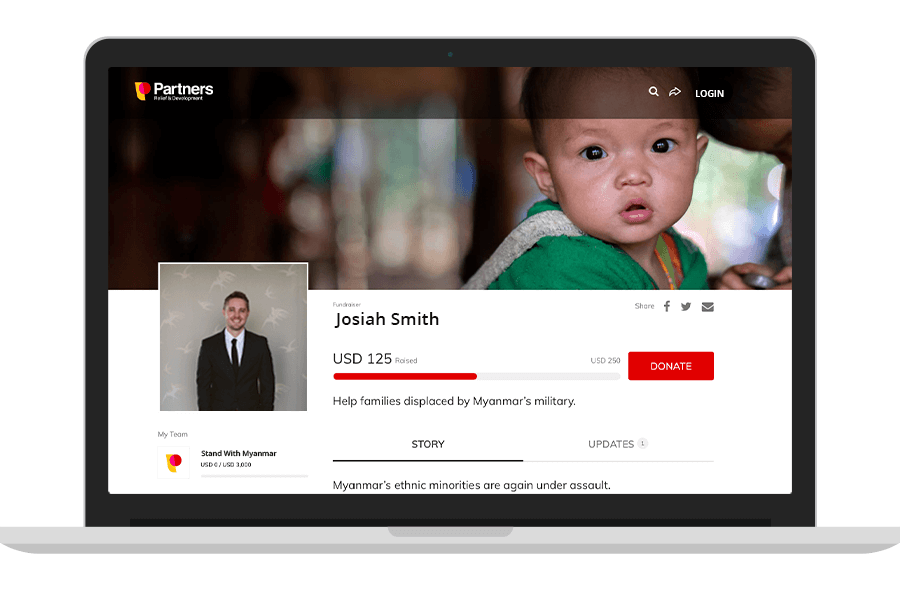 “The military has the authority to lead the country and harm ethnic minorities. They force them to leave and kill them even now.”

What kind of impact are we having?

We’ve been working alongside our friends in Myanmar for 28 years. Over this time, we have formed deep relationships with these communities, always consulting with them to find out exactly what their needs are and responding as rapidly as possible. That's how many kilograms of rice you helped deliver to families who had to leave everything behind.

That’s how many people provided you provided with shelter to protect them from the elements. That's how many people you delivered blankets and clothes to, making sure they stayed warm.

We’re in this for the long haul.

Help us meet those on the run and in hiding with food, shelter, medicine and other critical supplies. And we'll continue supporting schools in conflict areas, training local health workers and investing in communities with the hope that one day peace will arrive. Because children in Myanmar shouldn’t suffer while the adults are fighting.